The Rouge Android can spawn everywhere. He only attacks players that are not Androids, but if provoked, it will attack any player.

When killed the android drops one of 4 Android Parts. They can be used at a Mad Scientist to transform the player to an Android. 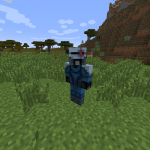